Yesterday for the second time in my life I stood over a casket that was only a couple feet long.  I had to be there.  The word “had” is such a modest word, designed to be over used and yet I use it here reluctantly and carefully.  I did indeed “have” to stand there.  Nothing external compelled me, only the internal bonds of friendship forged over years of shared experiences with the father of the infant who lay in the casket.  My friendship with Camden was so deep and so suddenly profound that I told many, “I couldn’t NOT be there.”  I had to come.

It’s the season of Lent and so the sanctuary also held the colors and slogans of this time of the liturgical year.  The purple hue was everywhere.  A giant wooden cross, much longer than the casket, hovered over us on the platform.  Decorated cloths held pictures of crowns of thorns and nails with the words of Isaiah woven into them.  “He was wounded for our transgressions, bruised for our iniquities.”

Ten short, but tortuously long days earlier her heart had stopped beating during delivery, sending the family and friends into a downward spiral of grief.  I personally read the news in a grocery store parking lot, where I sat in my car for a good ten minutes crying before mustering the strength to go into the store.

Ten days later here I was, standing in Lent, staring at a two foot long casket unable to keep myself even remotely composed.  I wanted to turn around, wipe the tears from my eyes, tell a joke or two and flee back to sunny Utah where I could bury myself back in the drudgery of daily ministry.

Yet as I said at the top of the post, I “had” to be there.  I had to stand there and look at it and cry because this casket is a profound piece of the Easter story that we tell and commemorate every year, even every Sunday.

As I sat there looking at it through tear blurred eyes, I could not escape from the fact that there is something desperately wrong with the world in which we live.  It is as if the casket was calling out, “Houston, we have a problem.  Heaven, we have a problem!”  And as I contemplated the mystery of the infant’s casket, I realized the problem it proclaims goes much deeper than human behavior.

In fact, this Lent I have been thinking a lot about the Galilean Pharisees of Jesus’ time, these people whose job it was to fix people’s behavior.  In the Gospel of Mark we see them partnered with the politicians, known as the Herodians.  They were strange bedfellows for sure, but they had one great thing in common, other than their mistrust of Jesus.  Both of them sought to build religious and political systems and structures to mitigate personal behavior in the hopes of fixing what is wrong with the world.

Then I thought about Jesus who wept at his friend Lazarus’ tomb.  Lazarus didn’t die because of human behavior.  He died because, in the words of the Apostle Paul, “the world has been subjected to futility.”

All of us, from every dot on the spectrum from sinner to saint, carry that futility with us in our bodies and every once in awhile that futility makes itself plainly evident, as it did for my friends on the delivery bed two weeks ago and as it did for my sister five years ago when my niece died of SIDS.  The Pharisees would have chalked the casket up to “secret sin.”  But we know the truth.  This infant did not die because of sin.  This baby died because of a world subjected to futility.

How ridiculously powerless we are in the face of that futility.  In fact, how absurdly powerless all of our pastors, all of our politicians, all of our churches and businesses and universities and clubs and committees and manuals and TV shows and pharmaceutical pills and self help books and rules and laws and systems and structures and so much more are when faced with the casket of an infant!

This world desperately needs you and only you. 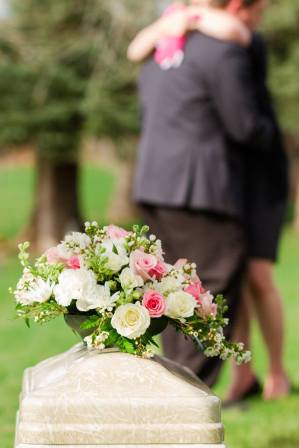